Level 1: Melee (Dur.) Uses a sword.
Level 3: Charge. Tengu extends its wings and does a quick flying dash towards an enemy unit, and when reaching them performs a slash that does 150% damage. Max range is 8 tiles, min range is 3 (can't target creatures closer than 3 tiles). The dash does not exit invisibility state (the attack does). As he flies during the move, he can cross water and lava without penalty. 6 Seconds recharge.
Level 5: Speed Up. You know what this is.
Level 8: Wind. The Tengu uses a hauchiwa fan and blows away creatures and poison gas with it.
Level 9: Invisibility. You know what this is as well.

Special ability: Flight. Should speak for itself. Contrary to other flying units, however, the Tengu will normally only fly when he needs to (e.g. to cross lava) or to cross water.

Information: Tengu are mythical creatures from Japanese folklore. They're crow spirits that live in the mountains. They appear in a variety of forms, varying from more humanoid designs (with red masks and long noses) to more birdlike designs. Tengu are sometimes also associated with war, having great knowledge in the art of skilled combat. In this sense they're slightly related to the Samurai. Some also said that ninja were instructed by Tengu.

Behavior in Dungeon: Tengu will, when under a keeper's control, occassionally go to the training room and train if possible. If there is also a Samurai training, the Tengu will spar with the Samurai.

Battle Style: Blitzer. In combat, will usually just get to the enemy as soon as possible to attack. Naturally high speed, Speed spell and Charge attack help with this. These units can be classified as Fragile Speedsters, as while they're quick units with decent damaging abilities, they can't take too many hits themselves, with their low health and Armor.

Jobs: Tengu will sometimes train by themselves. They can manufacture and research if the keeper commands them to, but they're not particularly effective at either. Can also guard.

Hates: Nothing in particular

Lair: A tree stump in the corner with a branch sticking out towards the center. When sleeping, the Tengu will step on the branch and sleep like a typical bird (like this).

Appearance: The Tengu, from Japanese mythology, are crow spirits, often shown as either being birds, humanoid (often also with large noses and red masks) (Hanadaka Tengu) or something in between, as anthropomorphic birdlikes (Karasu Tengu). The latter design is what I'm going for with this suggestion. See the image below to see what I'm getting at. 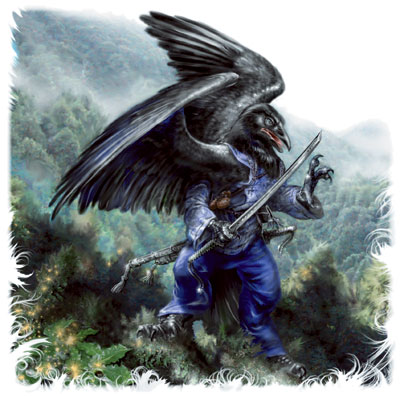 How Introduced: As a Neutral Hostile in some level.

Torture: Torturer uses the Tengu's sword to cut his feathers off him.

I think it would be an awesome hero

I think heroes should be strictly human-only, but yeah, I see where you're getting that from.

Mothrayas said:
I think heroes should be strictly human-only, but yeah, I see where you're getting that from.
Click to expand...
Nice work ..... I still hate birds though but I can totally see this on the side of good judging by the art work I would go for a more American Bald Eagle look with the face though their cool looking birds but they are still birds and I hate em & what do you mean heroes should be strictly human only? Dwarfs, Giants & Fairies not human but they are heroes in DK2 sooo I don't see how that's relevant?

They still possess a human form, its just a distorted one. They still have the same body structure, facial structure and skin tone which isn't quite the same as having the head of an eagle.

I'm not against having some heroes which don't resemble humans, but if so it should be kept to a minimal minority in my opinion.

Damn I forgot about elves......lol anyway I see your point guys more human like its goodly hero more beast like its evil keeper creature gotcha.

On Topic segment:
Like this, and I do really like the idea of it being a Hero, and I agree with MeinCookie in that some Heroes could have non Humanoid characteristics, as long as they are in the minority.

Off Topic segment:
I just have to know, why do you hate birds so much, Jared?

Please don't take me to that dark place in my soul PumpkinKing! Please not you man not you bro please of all people don't do this to me!

Okay seriously now the reason I hate birds is because I'm a continental professional cyclist every season magpies harass me on the bike for a good 2 -3 months it doesn't sound like a big deal but when you have to train on the roads for between 3 - 7 hours a day every day that shit gets reeeeeeeal old real fast oh and the fact that I live in the bush where every morning and every evening and all fucking day they make those irritating sounds SQUAWK SQUAWK SQUAWK!!!!!! goddammit they are loud it's just great to wake up to that racket every morning oh and then they shit on you on the odd occasion oh yeah and how could I forget they get stuck into and fruit or vegetables you might be growing geeeee that's sure fun after watering and fertilizing the plants for weeks and months. :mad::mad:

Don't tell me hey why don't I just move to the city because the bird pollution is just as bad birds are plentiful here on the Gold Coast in Oz yes sir there is all manner of feathered vermin about, and thats why I have an air rifle and shoot them with extreme prejudice

I'm happy to put your mind at ease oh yeah and I hate cats to don't even get me started on cats.

Not cats too!
Cats are my favoritest animals in the whole world!

But anyway, we must stick to the topic. I've made a pledge to not layway any more suggestions.

PumpkinKing said:
Not cats too!
Cats are my favoritest animals in the whole world!

But anyway, we must stick to the topic. I've made a pledge to not layway any more suggestions.
Click to expand...
fair enough now go have a look at the picture I drew and let me know what you think it's on MeinCookies Redcap creature page
N

Well balanced creature, and something I'd love to see. However wind and invisibility kind of causes me a bit of frustration, dunno why. I have a fear that it will stick out too much compared to other creatures, would be good to have suggestions similar to this one

Mothrayas said:
I think heroes should be strictly human-only, but yeah, I see where you're getting that from.
Click to expand...
why not its a humanoid... it can be a sacred guardian of the good gods. i mean if there are dark god then there are good gods too..

Roald said:
why not its a humanoid...
Click to expand...
That's not the same as human. Trolls are humanoid too, and they're not heroes either. Hell, even the Horned Reaper is humanoid and how much does that say about its alignment?

I dunno about the whole "good gods' guardian" thing. Would depend on if it fits within the lore.

if there are dark gods there should be good gods else the dark god could just easily take the overworld over.
at least thats what i think...
Likes: Jared

Roald said:
if there are dark gods there should be good gods else the dark god could just easily take the overworld over.
at least thats what i think...
Click to expand...
I agree how could there only be evil gods? There has to be balance in the world seeing as how gods are all powerful if they were all evil then nothing could stop them from destroying everything, so there must be good ones standing in their way. Also technically in a way we are playing as a demigod in the DK series not a true god because we can be destroyed whereas true gods are immortal and cannot be destroyed although they could be imprisoned by other gods

I feel that the tengu wouldn't be fitting for the keepers side. More for the heroes, and only above ground. I can't imagen these ever travelling underground. I mean, I would imagen these creatures would die after a short time underground since they seem so.. I dunno..

Neros said:
I feel that the tengu wouldn't be fitting for the keepers side.
Click to expand...
It isn't "keeper's side". It's neutral.

And I still don't think it can qualify for hero, as heroes were and will probably still be strictly human-only.

Agreed, but I still have a hard time seeing these surviving underground for a longer time. I think its because they give me the sense of being a free spirit or something like that

Heros will have dwarfs, giants and faeries wich aren't human, wont they?

Egg said:
Heros will have dwarfs, giants and faeries wich aren't human, wont they?
Click to expand...
Each is close enough to being human. Dwarf is a small human. Giant is a tall human. Fairy is a human with wings.

Tengu is humanoid at best.