We've done this kind of thread for prior creatures, and the Succubus is one many of us have been waiting to see for quite a while so what the heck. What are everyone's thoughts on the design? What do you like and what do you not like? 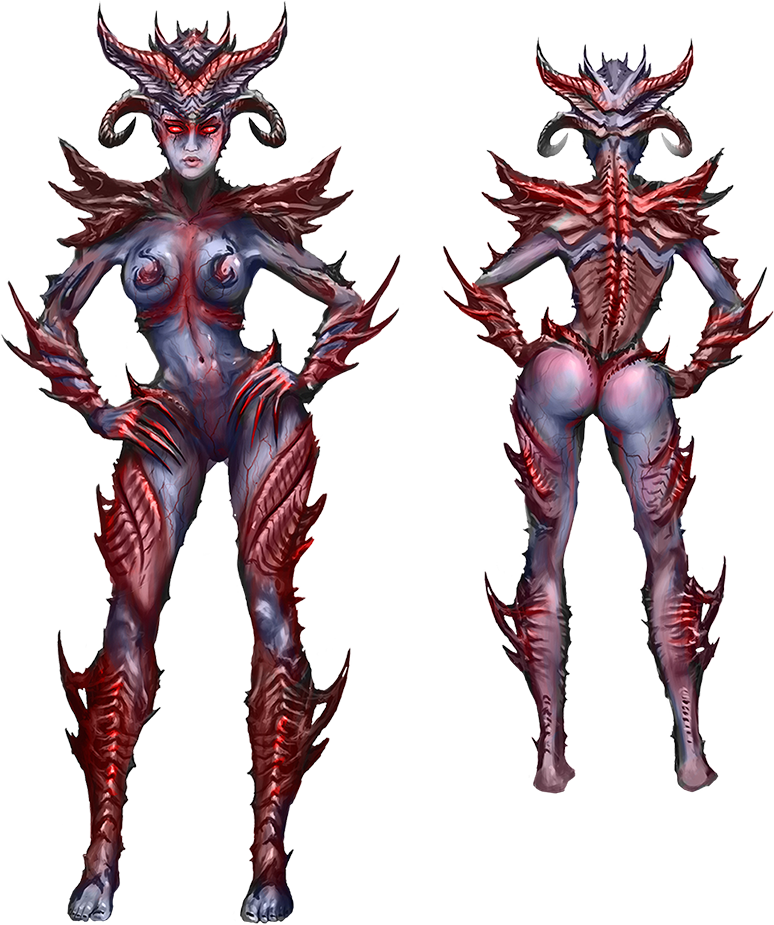 Again? Oh well... At least I can't fault you guys for not caring

Generally I like the design. There's a part of me that goes "I want it to look more attractive to me" but I don't care that much.

However Wings would completely sell me, I do love wings on my succubi.

But overall it's different, I like it and it suits it's purpose provided you argue it seduces people with demon magic because I personally would not touch it with a ten foot barge pole, who knows what I'd catch. I'm content with how it is.

I personally think she could do with some hooven feet and a tail, otherwise I'm perfectly alright with how she is.

But if this thread de-evolves into something else, I'm gonna kill someone with my lazer vision smile.

Evi said:
But if this thread de-evolves into something else, I'm gonna kill someone with my lazer vision smile.
Click to expand...

There we go I've completed the requisite talk about the Succu-bust so now you guys can carry this on in peace, without mention to the mammary glands unless absolutely necessary. You can thank me later!
Likes: Peetfighter

its very good, i like that the Succubus isnt just a normal Human Woman with horns. (like in Witcher 2 for example)
and i think its pretty much on line with being Seductive and a Fighter at the same Time.
its tending to be more on the Fighters side but thats good. Its a different approach to a well known and often used creature which is awesome

there is one thing though , ... ... ... ... even if i just said i like the different approach i want hooves
nothing thats really bothering me but well why not mention it anyway
Likes: Tommonius

What I like about the design is that while its physically attractive, she is also hideously ugly. I don't want to get into the issues of the WFTO Wednesday post of which I did agree with the a lot of one users points on the industry but I think whats great about it is that essentially beauty is in the eye of the beholder with this creature.
I really don't want some human dominatrix because personally I find it crass as i'm not a 14 year old boy. She can seduce male and female creatures and they will see what they want to see/fantasize.
Likes: scorpias

Underlord Vulukai said:
i feel that there is a very easy solution to this entire issue, while catering to both sides, and having a character equally capable of seducing both male and female enemy units:
http://warhammer40k.wikia.com/wiki/Slaanesh

Slaanesh, the Prince of Pleasure, or She Who Thirsts, is an excellent example of being able to take a being meant to and able to seduce either gender, being made to appear attractive to both while still being a blur in between both. This makes sense with the idea of a demon being able to appear attractive to anyone it encounters through the use of magic

*EDIT* this is not a cry to change the design, my personal view point of the model is that it looks great, this is just an option and an avenue that could be taken to have both, because while i agree that while chauvinism rules SOME of societies general outlooks of things, having an incubus able to seduce nothing but female characters, or both, as well as a succubus doing the same (because im certain we're speaking equality here, not catering to one side rather than the other) is an over all unnecessary addition of art resources for a unit that will accomplish the same thing regardless of its shown model. Having a mechanic in place to where they would only be able to beguile the opposite gender, with a 50% to beguile the same gender, while interesting in concept, would make things confusing in terms of tactical management, and over all wouldn't add much to the over all game either way.

Either way of thinking doesn't really bother me, and seeing Incubi in game doing their thing will probably appear just as goofy to me as Succubi, as i imagine little heart being blown to the unit if thinking in line with previous DMGs
Click to expand...
V

Maybe the crown of demon spikiness is a little over the top... maybe replace with something that mimics human hair a little, like Kerrigan from StarCrafts hair? Leave some/most of it, but just add to the vague image of humanity she has.

Her torso looks a little short in this picture, messes with the balance for me, maybe some spiky/clawed feet? Shoulders, arms/hands and back are dead cool, not gonna lie. I am undecided about leaving her breasts and butt so open, might be easier to give them a bit more spiky stuff covering them just to stop the inevitable backlash, but saying that it makes alot of sense seeing as we're talking about a succubus.

The Succubus was certainly not what I was expecting. I'm not saying this is a bad thing, and I think the design presented is a good direction to go in. However, I have some issues with it. I think the figure is roughly what I expected, but all of the spiky bits actually growing out of her is kind of creepy and repulsive - it throws her a bit too much into the uncanny valley. She either needs to be made a bit more human or a bit less to get her out of there, and I think I'd prefer the former. The head I think could stay as is and I'd stick with the clawed hands, but I'd prefer most of the other spiky bits to be clothing rather than something growing out of her, but in the same style like it's some kind of leather gear made from other demons.

Also, while perhaps some might not like this idea, I actually think she'd be sexier with more clothing. She's basically naked right now, so nothing is left to the imagination.

Something more in this direction, but using the original style that the art team came up with for the clothing would be more appealing IMO:

(Lilith from the Darksiders series, for reference)

Others have mentioned wings, and I think they could be a good addition but I don't feel strongly about them.

Noontide said:
Again? Oh well... At least I can't fault you guys for not caring
Click to expand...
I think these are a bit more helpful in terms of feedback as they are more focused than the general reveal thread and the poll results give some more numerical data.
Likes: wbvuong

To sum up : Wings, Tail and Bigger boobs.

That's what we all want.

the inverted wings look quite strange, but the overall design leans too much towards the generic i think. I still think a kind of creepy, spiny beast that insorcels its victims to believe its beautiful, while having a screaming, clawing, nagging part of their brain knowing every bit of horror that awaits them while being powerless to stop it, is still evil at its finest.

This coupled with my suggestion of a transgender half male half female monstrosity, beautiful but every bit abomination, would make for an awesome creature overall imo.

I can certainly see how wings could fit in here, but for me slender tail would really complete her visually for me; and no, I'm not just saying that because I miss the Augre tail

Underlord Vulukai said:
the inverted wings look quite strange, but the overall design leans too much towards the generic i think. I still think a kind of creepy, spiny beast that insorcels its victims to believe its beautiful, while having a screaming, clawing, nagging part of their brain knowing every bit of horror that awaits them while being powerless to stop it, is still evil at its finest.
Click to expand...
That's why I suggest keeping with the art team's style for the clothing - it keeps it spiky and organic looking, but isn't the generic sexy clothing you see on most succubi concepts. I think it would maintain enough of the creepiness factor, but moves the design to being more palatable.
Likes: wbvuong

I really really like the deadly look of the hands and body...... but I definitely think there could be some improvements. some cliché elements might benefit her slightly like a tail and wings and maybe slightly more smooth looking. Overall it looks badass though

For the record, her ability to charm is not dependent upon the sex of her target.
Likes: Sangromancer and Underlord Vulukai

This design is awful. What are these devs thinking. I mean, seriously?
Likes: Underlord Vulukai and Enjou

i personally love the current design, was just suggesting the alternative to help alleviate stressing parties

its the perfect mix between fem fatale and Dremora lord to me, no change, keep as is.
Likes: Amon

Let's talk about cup size now...I think she has to have a D at least...
Likes: Anafilaxis