Name: Butcher, or similar
Preface: This unit is one of the units linked to my Slaughterhouse post. At least one is necessary to work the room.
Appearance image: 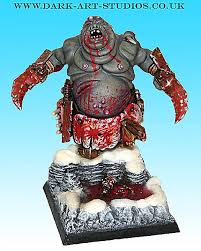 Something similar to this, but one arm normal

Information: These twisted men have gone to the extremes of their professions. Consumed by bloodlust, they have replaced their left hand / lower arm with a blade, which, due to constant soaking in blood, are rusty. Shunned by the Overworld, they have fled to the dark caverns of the Underworld. Here, with all the constant fighting, is the only place where they can completely satiate their bloodlust.

Appearance: A massively obese man, with ragged pants, a belt with several cleavers/knives attached, and a rusty, curved blade as his left arm, from the middle of it down. Grey skin, small eyes, maybe tusks. Try and emphasize the 'piggy' aspect of his appearance as much as possible, while still looking human-ish.

Behavior in Dungeon: If there is no victims in the Slaughterhouse, the Butcher will wander around aimlessly. Occasionally, he will go into the Torture Chamber and try to help out, but will just end up arguing with the Inquisitor (torture unit), decreasing the happiness of both. Something about different methods.

Anger reaction: Attack's your creatures. Calms down at sight of enough blood (the amount that comes out of a slapped chicken)

Obtainable By: Creature. Temple Recipe: Bloodling + some form of Human

Entrance Effect: Blood flows out of the Gateway, and several Cleavers accompany it. Out of the bloodflow falls the Butcher, who picks up the cleavers and attaches them to his belt. The blood then drains away back into the Gateway

Torture: Something along the lines of his cleavers getting broken

I see how they argue with inquisitors I like that whole butcher idea. But the abomination creation process should have a greater cooldown or a total cap on sewed up units on 1 butcher...

Inlaa said:
If you read his Abomination post, you'll find that the Abominations decay over time and have very few abilities. If they decay over time and can't be healed, I think that balances out.
Click to expand...
But if the double system of healing (butcher/cannibalize) stays, it could render them "long lasting" and then there could be a problem + their attack strength and armor are both in high numbers.
Only if your idea that they can't be healed at all or any other disadvantage is present, then thry could be reasonable.

iggii said:
But if the double system of healing (butcher/cannibalize) stays, it could render them "long lasting" and then there could be a problem + their attack strength and armor are both in high numbers.
Only if your idea that they can't be healed at all or any other disadvantage is present, then thry could be reasonable.
Click to expand...
Have removed the ability to Heal an Abomination
E

Please don't post in "ALL CAPS" in future.
OR MABY THEY CAN HEAL THEM ALITTLE, BUT IF YOU DO IT "TOO" MUTCH THEY WILL START TOO FALL APART AKA GET LESS LIFE INSTEAD OF MORE, AND THE MORE YOU HEAL THEM THE BIGER THE CHANCE OF THAT HAPPENING becomes!

i really really like the idea..... on one condition HEHAS TO wear a silly cooking hat

Much as I love the fact that one of my suggestions is getting attention after so long, I'm afraid this counts as Necro'ing a thread. That is bad. Against Forum Rules bad

AAW crap...yeah i kinda forgot to check the date
sorry about that
Likes: Amon

Kleiner Zorn said:
AAW crap...yeah i kinda forgot to check the date
sorry about that
Click to expand...
If it's any consolation... I've done the same thing XD
Likes: Kleiner Zorn