Preface: Wanted to include a support unit that causes chaos to the enemy. Revamped, taken inspiration from Greek Mythology. 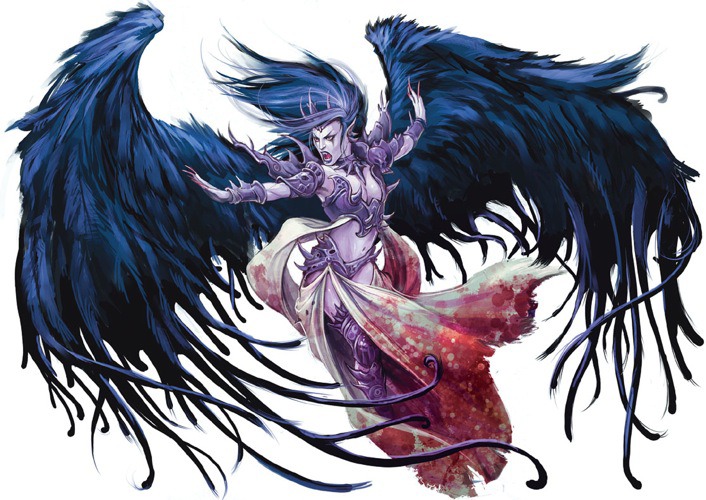 Skills:
1 - Melee
1 - Mind Spike - Psionic attack that damages the enemies nervous system.
3 - Misfortune - Causes the enemies attack to go critically wrong, dazing them.
5 - Dominate - Causes an enemy to attack its allies.
7 - Sypthon - Drains the health of the victim, and gives it to the Seducer
9 - Chaos - Makes 5 enemies attack their allies or each other for 10 seconds.
10 - Assassinate - Kills a target or knocks them out depending on if the player has a prison.

Information: Normally a spirit that haunts the dreams of mortal men. The Dis is the bringer of Strife, chaos and misfortune. Using both her looks and spells she sows the seeds of destruction in secret. Dis's have in the past caused entire towns to turn on each other by sowing jealousy, misfortune and dominating peope of power to spread tyranny and sin.

Appearance: Her normal appearance is a beautiful enticing woman with large feathery wings and slightly longer canine teeth, with red or blue hair and skin from tanned to pale blue. However she is capable of using glamours to appear however she wishes so her victims don't see the danger they are in.

Behaviour in Dungeon: Goes to research or entertainment, she also will go the prison and try to turn male heroes.

How Introduced: Introduced when heroes are too strong for straight out brawl. The player will be required to have the heroes destory themselves (or at least weaken them greatly) to allow their own creatures to be able to attack the heroes.

We already have succubus as confirmed unit (90%)

What are the main differences in skills or appearance among mistress, seductress and succubus?

Sarevokus said:
We already have succubus as confirmed unit (90%)
Click to expand...
True, i've altered the descriptions and abilities to change the unit from a seducer of men to a sower is discord, which was more my original intent.

the creature acts now more like Eris from Greeky Mythology and a bit of Beshaba from the Forgotton Realms Pantheon.

iggii said:
What are the main differences in skills or appearance among mistress, seductress and succubus?
Click to expand...
Mistress is a human woman dressed in skintight leather.
Succubus is generally a demon with large leathery wings - with more modern versions having more demon features such as horns, hooves, talons and a tail etc.
The Eris looks more like Eris from Greek Mythology and an erinyes.