Preface I think a slime type monster would be a great addition to any DK like game like WftO ... neaarly every RPG / Dungeon crawler game has a low level mob like this in it ...


Think about its not standard its classic 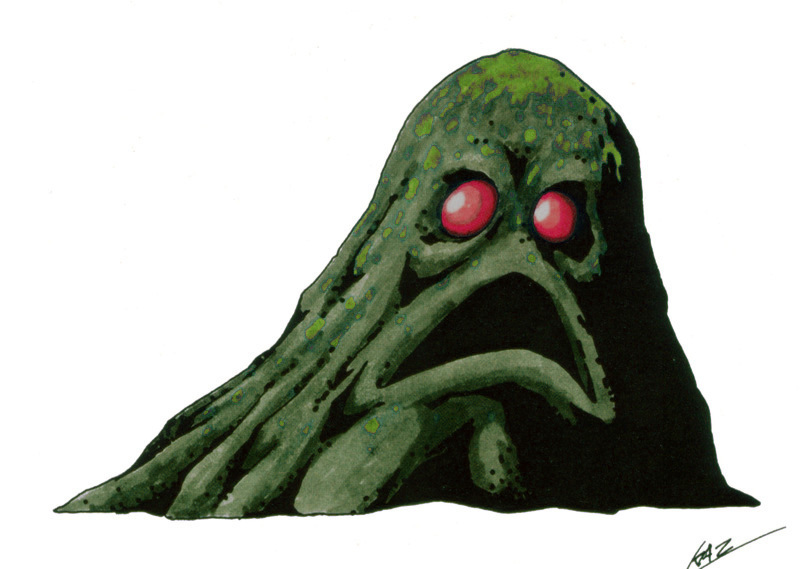 okay this is from shin megami tensei but there are really no good pics for slimes out there ? i like them better without eyes whatever


Level 1: Melee Attack
Level 3: Poison shot (Medium Range weak but poisoning attack (Dot? ))
Level 5: Tentacle Binding ( Binds and immobilises one enemy (and Itself) for a short Period of time doing low damage)
level 7: Acid Puddle (Creates a puddle of acid Damaging enemies (and allies without immunities? ) in an Area for a set duration and giving a Armor Debuff (around 20%? ))
Level 10: Divide (if a Slime reaches Level 10 it will split into two level 5 slimes... it wil not be imbalanced as long as it is hard to reach this level)


Weaknesses/Resistances: Resistant to Blunt Damage, Imune to Poison(if such a status exists ) and Acid Damage.


Weak to Fire Attacks (its flammable)


Information: Its a Tanky low cost unit with support skills helping your high dmg units to do some Dmg without getting hit.


Appearance: Slimy Non-Humanoid Monster that crawls through the dungeon leaving Puddles of everywhere it goes. Well i thought abou a green Slime but well it could be any colored or even Luminescent (wich would be awesome). Through the type of its body it could change shapes for Intereactions with its sourroundings. (Like changing in to a hammer while attacking or a Wall while getting hit... a Cage to lure in the creatures that will be used as food in this game or a Glass to be filled with ale in the tavern or a chest ready to be filled with the wage )
(well it should get bigger the higher the level )
i may be alone (or it may be to much work) but i like this


Behavior in Dungeon: I thought it could just wander around the dungeon while it is idle. Maybe sing guard rooms (or its equivalent ) or guarding entrances by themselves (there must be a reason why they are nearly always the first encountered monster right?)


Battle Style: Well most certainly its a blocker with an addition of being capable to Debuff Enemies.
It should try to actively Blocking the High Damaging melee units to Protect your own weaker units


Jobs: Training and Guarding (maybe working in the workshop? )


Loves: Water (or damp rooms ) (Swamps or something? )
Guarding
Being Relaxed (no job, eating, resting)
loves everyone who is weaker in terms of Levels (it will concentrate on guarding
(working?))
Hates: Lava/Fire
Being surrounded by stonger Monsters (setting it to train)
Being beaten in a fight.


Lair: Looks like a Hole in the ground used by a slime (maybe with organic looking slimey things in it


Attracted by: Having a Dungeon ---> not a specific room but the standard equipment like lair, Treasury and hatchery must be in it


How Introduced: Like a new Basic unit after getting the required rooms in the campaign.


Entrance Effect: Tentacles reach out (if its like a hole in the ground like in DK 2 (never seen any imagine for that?) to the portal rim and a Slime climbs up


Torture: Burning at a stake till its nearly molten to too a small puddle then the fire gets extinguished it regenerates / reasembles and gets burned again.


Advisor Quotes: A slime reached our Dungeon we have already won ! ... well ... okay i lied


i hope this is at least a little interesting ...

Sorry if my english is bad im not a native speaker

well now it actually features text... feedback would be nice *Push* (sorry but im not sure if anyone sees it after my problems with the forum ...(and editing and erasing itit about 3 times ...) )

Relax, you created this thread less than three hours ago and I'm sure most people are having a few days off between Christmas and New Year's Eve.

I like Slimes. There was some thread covering a Gelatinous Cube a while ago. It was supposed to be a neutral creature that can be very dangerous if agitated, because it can ingest your units. It could only be killed but not converted. I think, this would suit Slimes best, too. I don't see them as a loyal minion in an Underlord's dungeon, however...

sorry for pushing then

well never found anything like it through the search function

EDIT: yes, i am blind actually

Yes, you must be blind I just typed "gelatinous" in the search bar and there it was: https://subterraneangames.com/threads/neutral-creature-gelatinous-cube.93/#post-2632

The problem was that the cube form is already invented by dnd (one of their most econic monsters) but a giant amoebe would do the job too.
I really like slimes, they are always interesting, maybe they could have the abbility to slip through cheap closed doors?
Slimes dont have to be loyal, they are dumb as bricks, but I think an underlord should be able to control them with magic.
(which explains everything)
I dont care if they are neutrals or units, even as neutrals they could make be useful if handled right, because of the slow movement you could lock them in rooms and unleash them in restricted areas the enemy is breaching in.
and yes its hard to find good pictures: 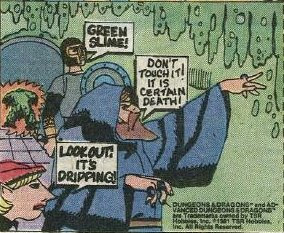 Actually, any combination consisting of one of the following words - Ooze, Slime, or Jelly - plus either D&D or Final Fantasy or, really, any video game with such a monster will produce good images. 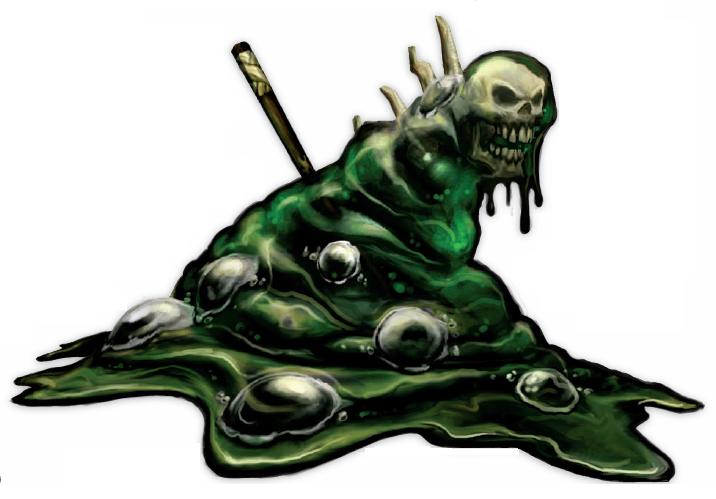 hmmm the one with the skull looks nice !

after thinking about it ... i like slimes i really do i never understood why there arent any in DK ...

they are by far the most famous enemies in RPGs ... as said nearly every game features a slime time monster...(and as far as i know its not really based on folklore? so some crazy dude thought hey lets make a giant Blob of slime .... and let it eat people or something (and thats cool))

well then to my suggestion: After sleeping a night over it i think now that its not really interesting , i dont think that its imbalanced or something like that but (like the Gel Cube) somebody (from the developers too) must have thought of : Slime
i think it wont be a difference if i suggest it again...

but then came this to my mind:
it could be any colored or even Luminescent (wich would be awesome).
Click to expand...
and if i remember correctly some video (the kickstarter announcment vid?) featured concept arts of cave like sourroundings ... and you could see blue glowing mushrooms in it...

In terraria slimes glowed in their own color adding an eerie atmosphere to the works in the caves.
Think about it : do we have any animals in WftO? any just atmospheric gimmick ? (well i dont know about it at least correct me if something like that was announced already... do it )


and in the same thought came to mind: why does an underlord (or keeper in DK) uses torches ... at least normal torches to light his/her dungeon? where are the spikes of evil and the Red glowing Crystals that light the path to the death of the heroes? i mean torches? its so overworldish

BTW: if a Dev reads this: Just that you know i played the Demo thingie now and it works it feels like good old times (and that without any gameplay) and that is seriously, absolutely great work ! Thanks for reviving this Genre of game

Torches just feel right^^, Maybe slimes could, (when hitted often by a ligthningattack) charge themselves up? They would still take damage by the electrificy but could be able to add electric shocks to their attacks for a while.

Slimes could possibly drip from ceilings, onto the heads of invading heroes.
Likes: Lord of Riva and theMarg0r

As you'll eventually see in the concept art, the slime has absorbed and is slowly dissolving an unfortunate hero. Now as an insta-kill ability this would be very OP, so I can see 2 possible abilities based on absorbing stuff to keep it as a powerful ability without instantly killing enemies.

Absorb (Active): The slime would absorb a single enemy and slowly damage that enemy (who is trapped inside and unable to fight back) and that enemy would eventually die. But if the slime was killed (or dealt significant enough damage) by the other heroes before the enemy inside was dissolved. The slime would burst and the enemy inside would be released. Long cooldown to prevent it been used frequently and the Slime's speeds would be decreased significantly until the enemy inside was dissolved or released. This is basically a stronger version of the Tentacle Binding ability to suggested originally.

Absorb (Passive): Every time an enemy makes a non-magical melee attack against the Slime, it has a X% chance to absorb their weapon into it's body effectively disarming the enemy and debuffing their attack damage. In addition the Slime is immune to basic ranged attacks (arrows and crossbow bolts, etc would just be absorbed into it's body), Magical attacks obviously do damage as normal.

I also think it would be quite cool if the Slime exploded/burst when killed covering everyone near it in slime and slowing them all for a few seconds.

Fragile (Passive): The Slime's fragile body will burst in a slimy mess when eventually killed. All creatures (allies and enemies alike) within the blast radius are covered in it's slime and slowed significantly for a few seconds.

I like the Absorb idea, although I think it could go right into the uncanny area for some players. And in certain other areas for . . . other players.

I'm not saying which.
R

Fireeye said:
I like the Absorb idea, although I think it could go right into the uncanny area for some players. And in certain other areas for . . . other players.

I'm not saying which.
Click to expand...
It's kind of traditional for amorphous blobs to engulf and dissolve enemies, though.

Raineh Daze said:
It's kind of traditional for amorphous blobs to engulf and dissolve enemies, though.
Click to expand...
Yes, but some people . . . you know what? Forget what I said, and think of happy children and pretty flowers and a blue sky. I have seen to many things I deeply regret.
R

Fireeye said:
Yes, but some people . . . you know what? Forget what I said, and think of happy children and pretty flowers and a blue sky. I have seen to many things I deeply regret.
Click to expand...
There's a succubus in here. Can't get any worse.

the one with the skull looks cool.. sadly i dont think WFTO can use that since that paricular design is in World of Warcraft

Raineh Daze said:
There's a succubus in here. Can't get any worse.
Click to expand...
Yes. Of course it can't. Certainly can't.

If you'll excuse me, I'm gonna go to my happy place.