Preface Inspired by general energy beings, the Ascendant is a powerful mage that will easily be destroyed in melee combat, but that can dispatch most enemy mages without a moments hesitation. A late-game anti-mage. 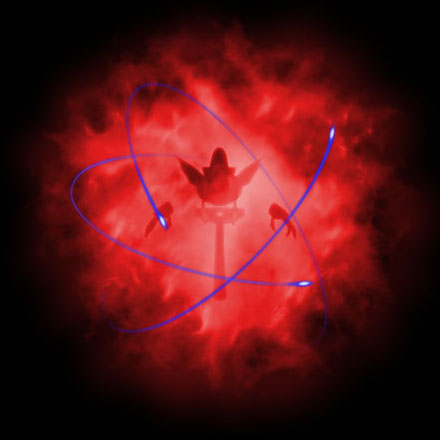 Health: Low to Medium, depending on level.
Armor: None to physical melee attacks or ranged units such as archers. Very high towards spells or other magical projectiles.
Movement Speed: Medium
Attack strength: Very Low
Attack speed: Low
Intelligence: High
Construction: Refuses to and is unable to manufacture
Training Rate: Medium
Training Cost: Very high
Wage: Medium, only to research new spells and to increase it's own power will the Ascendant demand pay. At max level, it will not need any more wages.
Gender: Impossible to determine.

Skills:
Passive: Ascendance: Having transcended the physical plane, the Ascendant needs no sleep or food.
Level 1: Melee. Power bolt: Fires a small ball of raw power that does low amounts of damage, but recharges quickly and draws a small amount of blood from the enemy it is fired upon.
Level 2: Forceful Shock: Fires a tendril of lightning, damaging and silencing (Prevents spell usage) the enemy it hits. Low cooldown
Level 5: Dispel: Removes negative magic effects from friendly creatures and positive magic effects from enemy creatures. Severely damages enemy summons or magical constructs.
Level 7: Sacrifice: Kills a friendly creature and gives a bonus to the Ascendants spell damage and recharge timer proportional to the level and rarity of the creature sacrificed. Alternatively, kills an unconscious enemy unit and restares a small amount of health to the Ascendant.
Level 9: Arcane Shield: Blocks the next spell fired at the Ascendant, and immediately refreshes the cooldown on the spell cast before spell resist.
Level 10: Tempest: Creates a magical storm around the Ascendant, dealing low periodical damage to all nearby units. Damage done is amplified by 5 against enemy magic users. To cast this spell, the Ascendant sacrifices 60% of it's HP. Very long cooldown, Tempest will not refresh if a spell is blocked by Arcane Shield.

Information: While most of the warlocks, mages, wizards and cultists serve some remote being or distant ideal, there are some magic users who simply desire the raw power of the arcane, and so spend their every day searching for ways to expand it by locating and studying the ancient tomes scattered across the underworld. Many die in their pursuit of these tomes, as they are rarely willing to share their power with others, some go mad with the revelations. Some men, however, prove to be very receptive to what they find. Legends say that the mages who study these tomes for decades can finally unlock the last secrets of the arcane, and transcend the physical plane for something... more. It is not known if these legends are true. What is known, however, is that these Ascendants are some of the most powerful arcane beings in the underworld, and if the legends are true, it would truly require someone special to give up their earthly body to become what they are now.

Appearance: General thought is that the Ascendant basically has some kind of blurred humanoid form inside a field of red lightning or raw energy, referring to the split nature of the Ascendant, both human and supernatural. In a way, the Ascendant seems almost ghost-like, but be warned: It can still be brought down by the cold steel of your enemies, despite it's appearance.

Behavior in Dungeon: Ascendants rarely like to fraternize with other creatures of the dungeon, and considers most creatures beneath them. Therefore, they spend a lot of time outside their homes, searching for whatever arcane artifacts or shrines they can find. If that is impossible, or simply too dangerous, they will spend their time in the archive, although they have been knonwn to keep their secrets to themselves, only in the most rare occasions revealing them to their masters.

Battle Style: Offensive spellcaster. The Ascendants will seek out the enemy mages and attempt to duel them in combat. They will by any means necessary attempt to avoid physical fighting, but will gladly take on several times their numbers in enemy mages, due to their prideful nature.

Loves: Finding magical artifacts and shrines. Also, Ascendants often taken a liking to the cultists, due to that cultists often deeply respect the Ascendants as a manifestation of their dark gods powers. They share a mutual respect, and a mutual interest in search for power, although for different reasons.

Hates: Being kept from combat or exploration for too long, as well as interacting with most creatures in the Dungeon.

Anger reaction: If not stopped, the Ascendant will attempt to destroy portions of the dungeon before leaving. Do not underestimate their destructive potential.

Lair: A crystal formation, which they can enter to heal themselves.

Obtainable By: Through portals, rarely and near shrines or artifacts (As neutrals that may be converted)

Attracted by: A very large archive as well as at least one possessed shrine. Higher amounts of shrines will allow more ascendants.

How Introduced: During a mission where the player must search for a specific magical shrine, and must contact an Ascendant besieged by the Empire to find the shrine.

Entrance Effect: [OPTIONAL] The Gateway is bathed in lightning as the Ascendant enters the dungeon.

Torture: [OPTIONAL] During torture, the Ascendant will simply be punched by the torturer. Any magical or technological torture would be useless, but it's very very weak towards physical torture.

Advisor Quotes: [OPTIONAL]
''Ah, watch now, Underlord. It would appear an Ascendant has chosen your dungeon as his next destination. Powerful beings created out of raw energy, they can reign destruction onto your enemies on the battlefield, and if angered, in your dungeon. While useless in melee combat, it will surely make up for that through his arcane powers. He won't share them though, so don't pry. Watch it carefully, and he might be your greatest asset in this war''

It does have a very weak melee, although it has a small amount of utility attached to it, anyone with even decent armor is going to block the damage easily.
That would be interesting, and would be keeping in with the lore. However, I don't think of the Ascendants as summoned beings, rather mages who have managed to enchant themselves to a ridiculous level into the beings they are now. As such, dispel shouldn't have an effect on them, and from a gameplay standpoint, it would be a bit weird.
They're not embodiments of the Dark Gods, but rather a sort of physical (Or physio-magical as the case may be) manifestation of your power, as the player. Or at least, that's the way the cultists see them. An Ascendant is rather impressive thing to look at. Seeing it on your side is a good thing, and so, it shows that you indeed have quite a good bit of magical power.
I'm thinking that it would either defect to the captor of the shrine, leave, or go neutral.

Why not scrap a melee attack, and (looking at the picture here) give it a blade aura type of thing, swirling blades spinning round it constantly for weak laceration of nearby enemies... And allies!

Ben Chandler said:
Why not scrap a melee attack, and (looking at the picture here) give it a blade aura type of thing, swirling blades spinning round it constantly for weak laceration of nearby enemies... And allies!
Click to expand...
Every creature should have a melee attack against melee creatures, even if it is weak.