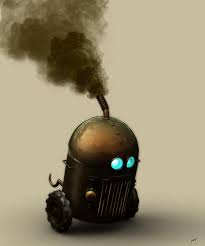 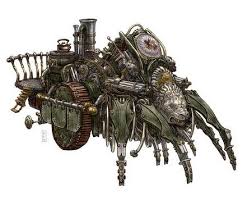 Some thing like this with a Mo hawk on top

**Please note** I am adding this creature to fill the steam punk gap. I am going for a mine layer unit but if you don't like the idea of mines I think this unit could easily be adapted in to a different support role.

Highlight: It can lay mines.
Faction: Underlord / Empire / Neutral / Any
Type: Droid
Role: Defensive
Acquired By: Workshop
Basic Attack: Mines
Offensive Power: N/A
Defensive Power: Moderate / weak
Resistances: Moderate / weak, for everything
Movement: Moderate
Work: Workshop to battle field
Entertainment: Listens in to the NSA or guessing where you want mines placed!
Special Needs: Mine resupply in the workshop, (it can make its own mines in the work shop)
Upgrades: At higher levels the Steam Punk gets a speed boost.
Traits
T1 - A support unit that lays mines.
T2 - It can collect the fallen and take them to prison
Level 1- (Mine layer) - Can lay up to 3 mines before needing to return to the workshop for resupply.
Level 6- (nitrous) - The Steam Punk gets a permanent speed boost.
level 10- (Self destruct) - Boom
Flavour
Appearance: See above but with a Mo Hawk
Likes: Being useful
Dislikes: Having nothing to do
Behaviour: This useful little guy will hang out in the workshop building mines and awaiting orders. He will position mines where ever he is told and bring back fallen heroes to the prison. No need for food, but may need the occasional touch up in the workshop if damaged. The Steam punk has no real intelligence which is a problem when they get bored. Left too long they will try to be useful by guessing where you want mines placed. With out the overlords safety checks these 'guessed' mines may be a danger to your own creatures and positioned in really stupid places.
Additional: Mines produce a moderate close range explosion that can hit multiple targets. A buried mine is invisible to the enemy but so is a 'guessed mine!'
Torture : Angle grinder, electricity, paint can shaker.
Back story : Once there lived a race known as The Blood Dwarfs, these dwarfs excelled at mechanical works. Tired of being ruled, the Blood dwarfs hatched a cunning plan to build a mechanical army which they could use to destroy their Underlord and rule them selves. Everything from Giant axe wielding brutes to tiny little spy insects were build using metal and powered by steam. Unfortunately for the Blood Dwarfs their manufactured army could not tell friend from foe and started to murder, Blood dwarfs, them selves, the underlord, well everything really. There are no more Blood dwarfs any more. The one relic (success story) was 'The Steam Punk' as its function was support rather than aggression this unit is one of the few mechanical creations to survive.

I must admit, my personal feelings is that Steampunk generally is cool, but I don't really feel that WftO has a 'Steampunk Gap', since I really don't feel that the game needs a steampunk creature. That is to say, for me personally, I don't think that having a steampunk creature in the game is actually going to make it any more enjoyable. Of course, this is just my opinion, and I might be interested to try out a few steampunk related mods if they appear.
Likes: Aelius, toffeejay, Amon and 1 other person

@Medjay - I would like to see a diverse range of creatures types to choose from. if you don't like something you can always throw it out. What have we got, humanoid, beast, mythical, demon, insect, (I struggling to think of any other types). Plenty more room for diversity here.

Medjay: I agree with you on this one...

There's a general medieval theme going on, imo steampunk-like creatures and such don't really fit in there.. I'd keep with the traps and such, which are a wee little bit steampunk if you look at them, for the mechanical things... Let creatures be creatures, not machines...

@MarcelN - Fair enough if you don't want to see steam punk but I'd have to disagree with you. Steam punk and medieval/mythical have been working perfectly together for years in games and films. If you want to limit your self to certain creature choices then great but I personally would like the choice.
Likes: MarcelN

Cake Machine said:
@MarcelN - Fair enough if you don't want to see steam punk but I'd have to disagree with you. Steam punk and medieval/mythical have been working perfectly together for years in games and films. If you want to limit your self to certain creature choices then great but I personally would like the choice.
Click to expand...
I only posted honest opinion No need to agree with me what so ever I like the look and feel of steam punk, but I wouldn't really applaude it in WftO..

I think a steam punk theme would be cool

Magically animated mechanical beings I would be fine with, not so much steam powered, but aesthetically there is little difference, so I'm fine with it, however I would rather see a steam punk themed underlord with little mechanical workers rather than a unit which anyone could get.
Likes: Amon

Whilst steampunk doesn't necessarily fit the main theme (although a single unique steampunk underlord would be cool), something about this unit really appears to me... It's almost... cute... I just love the idea that it squeaks around laying it's mines and the idea that it tries to be helpful by laying mines on its own but isn't smart enough to do it properly just makes it adorable. I can almost imagine it making a sad squeaking noise when you slap it for putting mines in a bad place... like a misbehaving puppy or something.
Likes: Amon

Talking of Steampunk Units, i just had an idea for a unit that could be cool.

Basically something that looks like a big suit of armour, kind of like the Destroyer in Thor, but more demonic. It glows with fire and has chimney/pipes on it's back, and has a furnace in it's belly. Here's another couple of steampunk Iron mans, less gritty, and a little more modern looking, but still along the same lines 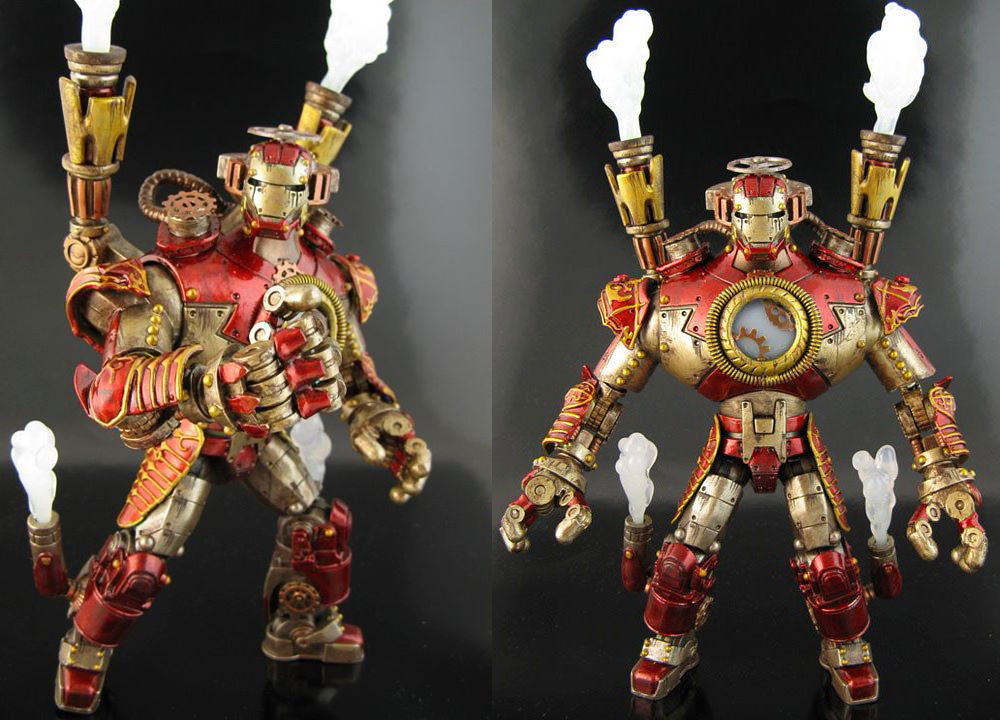 Now imagine that with touches of this 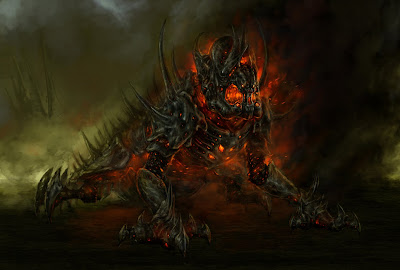 Steampunk Ironman is my favourite thing of today!

Speaking as a fan & not a dev --
I personally do not see the general world of WFTO "advanced" enough to engage in "steampunk" type concepts for creatures.


That said I love Steampunk 1/20th as much as I love Cyberpunk -- and I love Cyberpunk more than I love anything (except kittens........ man do I love kittens).
Likes: RachniKiller and Amon

Not even the god of the forge?

While Steam Punk may be out of WFTO world, the idea of device that can lay mines could be adapted. With such thing, Heroes can actually somehow defend themselves, not to mention it can make missions and campaign more challenging.

It would work perfectly for Co-Op missions and levels where Heroes should be much stronger and more protected, rather than just consist of lvl10 packs that can be lured to death trap or killed one by one ( with or without possession spell ).

Give it a few hundred years for the Underworld to finally advance into Steampunk and invade the overworld, by then we're in the age of infomation pwning them.

Badwolf699 said:
Give it a few hundred years for the Underworld to finally advance into Steampunk and invade the overworld, by then we're in the age of infomation pwning them.
Click to expand...
Not needed. Dwarven Race is known for their Engineering skills, so things like this could be in WFTO, they won't conflict with the game lore.
Likes: Amon

A horrid mix of magic and machine... MagicPunk?

The Dark Master of Onions said:
A horrid mix of magic and machine... MagicPunk?
Click to expand...
Nah, probably some supreme engineered device, made by smartest dwarven and imperial engineers and mechanics.
L

looking at the workshop in dk1 especially it's not ridiculous for an evil demon lord to have steampunk elements, after all you can get magic and clearly have an advanced understanding of mechainics, an intelligent steampunk would be problematic without the addition of magic but something as unintelligent as this could be quite cute it would also free up imps or whatever for digging and gold collecting without needing them to go and drag bodies