ok this idea was originally a joke, but I've thought about it some more and i actually think it could make a really good creature

Preface The name is a pun on Horned Reaper clearly, and it's a powerful and rare unit just the same, it is basically a demonic Vine creature, with big thorns, it could be humanoid, or more plant shaped, my original idea was for it to be a mass of thorny vines, with the exact same silhoette of the Horned reaper, with brown thorns where the Reapers horns would be, and also small thorns all over.

Appearance image: something like the first one, but with horns, although I'm open to something more like the second one, but that's not my preference. 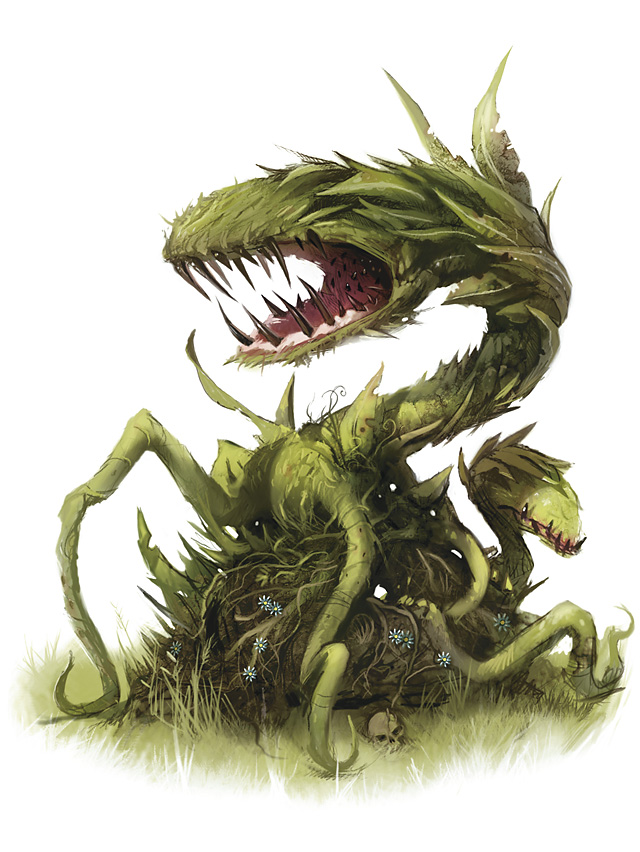 Skills: (Abilities that your creature can learn. Always add Melee to level one, and a ranged attack or such (e.g. archer's arrow) if appropriate. Use the Level: Skill [Description, if required] format for easy reading. In addition, they can have additional special abilities as well (think like flight, and such).)

Behavior in Dungeon: just sits there, in it's lair

Lair: a patch of soil with a shaft of sunlight

Attracted by: water, and sunlight (rare)?

How Introduced: found in a sunlit clearing at the bottom of a pit

Advisor Quotes: [OPTIONAL] that it is planty.
Likes: Medjay

I like this idea! Mostly because I love thorny plant monsters, but whatever. :{P I like the second picture more as concept art than the first, but I'm not a huge fan of needlessly humanoid creatures, so I'm probably biased.

For me it makes sense for them to be a neutral convertible creature; you stumble across one growing underground and it joins you.

What I heard from the advisor in my head: Congratulation Underlord, a Thorned Creeper has decided to join you! After all, blood is an excellent fertilizer, and what better way to get it than working for a keeper?

Sounds great but one thing...

Behavior in Dungeon: just sits there, in it's lair

default behaviour: it will sit there until you tell it to do something

anger reaction: it becomes so idle it won't even fight, it'll just make it's way back to it's lair, and stay there.

by tellin g him what to do, is dropping him somewhere? because if so, training and battle is the olny useful thing that we can tell him to do... so thi is kinda redundant..

make them do smething..dunno what plats do thought...

I really like the 'Thorned Creaper'. I personally would feel that it might benefit from an animal structure (like an animal on four legs, spikey and demonic) but that's just me. It's just that the Horned Reaper was very demonic and aggressive...which I guess is hard to live up to if you're a plant .

To be honest guys, i came up with the name and THEN tried to think of what it would be like so my ideas might suck

Medjay said:
I really like the 'Thorned Creaper'. I personally would feel that it might benefit from an animal structure (like an animal on four legs, spikey and demonic) but that's just me. It's just that the Horned Reaper was very demonic and aggressive...which I guess is hard to live up to if you're a plant .
Click to expand...
How about something like this? It's a Scrunt from Lady in the Water, although it is more grassy than thorny of viney, and I think it's kind of cute.

or this perhaps, which is quite cool, but needs more thorns, and probably a bit too big, i think it needs to be more slender

almost more like this, but thorny instead of bladey

Yeah! I like these. If you were to mix them all up and add that little spark of 'GRRR' or 'GROWL', I can imagine a very cool creature .

That bottome picture, now that's something I'd love to see!

Yeah that's a cool one isn't it!

I like the art work for the bottom one, but as a design for a creature in my dungeon I like the 2nd picture.