Brawler
Brawler - bulky, smaller version of Incredible Hulk, but is not green. He love to fight (even in A World of Heroes sometimes poeple fights), but in places where goodly heroes and their castles are far away from Brawlers huts. He and his poeple originates from lands where Underlords have made a big mess. Because his village had been burned by Underlord's minions he started to drunk, a lot, he was so sad.... Alcohol to his surprise gives him more courage, but aroused something that he didn't feel before - a pure rage. Noble peoples says he is an unstoppable brawling mass, but... there is something that calms his scraps of goodly nature - it is the worst music that any evil monster could hear - Bard's guitar and his cacophonic songs...

Brawler is perfect for ranged units, with his abilities in 1vs.1 fight it is very hard to knocking him out. 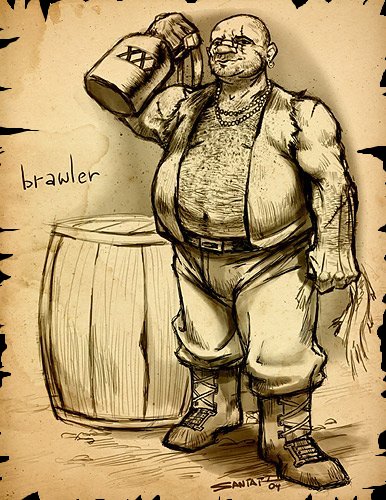 Pic.1. Brawler - and his favourite job - drinking and fulling his stomach.

Pic2. Brawler's another appearance and something that he loves - bar fight!

Traits
(T1) Born Dancer - When in battle there is a Bard in army, Brawler gets more Attack Power and because of Bard's playing raises Brawler's Evansion.
(T2) Ram - When hitting the door Brawler has chance to use Ram spell and knockout this door with one hit! - as door is stronger as this chance is smaller (maybe let's give a chance to use this spell for Wooden Door could be about 80%, for magic 10% etc).
(T3) Drunken - Because Brawler is always drunk... he is easy to hit - his Evansion is very low. Evansion can be raised if T1 ability is activated.
(T4) Rageman - If Brawler is hitting for random or certain amount of times he becomes rage, that raises by 2,5 times his Attack Power, but sharply lower his Accuracy.

Abilities
(A1) Haymaker - Deals heavy damage to target unit in melee range and has chance to knockdown this unit!
(A2) Big Burp - Brawler yields a monstrual burp that interrupts every spell castings in a small radius and has small chance to confuse/stuns units in a range of this... burp.
(A3) Provocation - Brawler provokes the target enemy unit that attempts to move into melee fight to engage the brawler (even if the unit is range unit it has to starts to fight melee!). The provoked enemy gains some Attack Speed, and Movement Speed for the duration of Provocation, but lost some Accuracy.

Flavour
Appearance - Big, fat man with big cup of beer, with metal fists. Mostly like on Pic.1.
Likes: - Bard and his songs.
Dislikes: - Tight place with many creatures around.
Behaviour: - He walks drunk as a barrel, sings sometimes and don't like if around him is tight - that makes him angry. He loves to listening to Bard's songs which make him happy. He started to dance or sing then.

Decent unit but I'd put him on the heroes side.

Great idea... Just simpler: none of this chance stuff; make ram, simply an increase to attack power vs doors;
Make haymaker a simple stun attack; drunken should make him fearless or something (with just a low base evasion rather than having it as a separate trait); and I'm just not sure about provocation... Maybe it's a general taunt which angers all nearby enemies?

Would love to see this in a friendly tavern brawl!

somehow i like it, im not sure if a "tavern brawler" would fit an Empire Unit though

In times of need the empire must recruit anyone to fight against the forces of evil... Well now they've hit rock bottom, and have found those who are, well barely evil; but barely good to be honest!
Likes: Amon