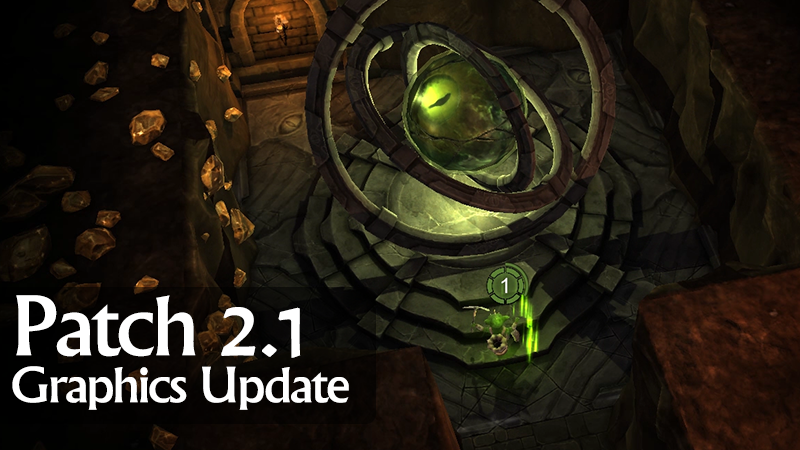 As promised a mere 11 days ago we have returned to this realm, dragging a surprise War for the Overworld patch kicking and screaming from the depths. This patch is a special one as it celebrates, somewhat belatedly, the 7th Anniversary of WFTO’s release and contains a few new features we, and you, might never have expected to see in WFTO.

But first an introduction. I’m Lee, one of the designers and the community manager at Brightrock. I’m better known in the community as Noontide. I’d like to take a moment to talk about the patch and why it’s a bit larger than our intended scope for maintenance.

A large part of this is a result of several months of on and off tinkering that I’ve been doing with the WFTO project. With input from my colleagues and assistance from the code team we’ve managed to wrap these changes up into this patch alongside the originally scheduled work and maintenance we had planned.

All of this is to say that this patch is meatier than first anticipated but also a little experimental and I would invite your opinions on changes that are being made here.

I expect this isn’t the last tinkering I will do with WFTO, but to set some reasonable expectations. I’m not a coder, I wasn’t involved in WFTO’s production directly and I’m still getting to grips with the project and its intricacies. A fair chunk of the work here involved a lot of help from others on the team who similarly supported me out of love and passion for the game.

So please understand that the inclusion of some unexpected features doesn’t change our intended plans for WFTO’s maintenance cycle. Which remains primarily an exercise in keeping a wary eye out for serious issues and addressing them with short bursts of activity between our work on Project: Aftercare.

With all that said I hope that you will enjoy the changes included in Patch 2.1 and you’ll keep an eye out for further news on Project: Aftercare this year

Now onto the patch notes!

Patch Highlights
Real-Time Shadow Support
One of my deepest desires for many years has been to see the game with real-time shadows, the light from torches casting long shadows of workers passing through, structures casting equally imposing presence on the environment. Ideal for dark, gritty dungeons.

There’s very real reasons why we never touched this. Frankly it’s super expensive performance wise, WFTO has a lot of dynamic lights already and each light is an expense, doubly so if they cast shadows. Then as time went on and performance generally improved, working backwards to introduce this was a non-starter because so much of the game had been done without it intended, as an example many objects that should have cast shadows, simply didn’t because they weren’t set up to.

Anyway a lot of that work has been a focus of my efforts, and now this is now a supported graphical feature. Largely I focussed on structures: Dungeon Cores, Shrines or significant light sources like the hand of evil. If you enable shadows this is the bare minimum you get.

Some other shadow sources can also be optionally enabled, mostly this means corridor torches right now but may be expanded in the future to include room props and more if there’s enough performance headroom.

Speaking of performance, it should be expected that this is a net-loss in performance if you enable this. I’ve provided options to help offset this and the recommended finds a nice middleground. But you can totally kill your FPS if you want to get the best looking picture, I just wouldn’t recommend it for moment to moment gameplay.

Part of my goals with my tinkering was to try and give the game a “deeper” atmosphere with an emphasis on feeling the effects of the terrain that surrounds you. First and foremost I wanted to communicate the sense that the player was underground with more oppressive shadows and lighting, whilst still allowing the player to see what they’re doing.
It’s hard to communicate these changes so here’s a few comparison screenshots.

Hand of Evil
Just over a year ago now we asked our Discord community whether they wanted to see the Power Hand of Evil, which was that year’s April Fools, make its way to the game. To say that the response was a resounding yes would be an understatement. So we finally got around to doing that.

The Power Hand can be access via the gameplay options menu.

UI Performance Optimisations
Thanks to feedback from the community we managed to isolate a few significant performance monsters in the UI. This should greatly improve the performance of the Main Menu but also parts of the in-game UI that are known to cause problems such as the units panel and veins of evil.

In some brief logging I confirmed a significant 41.8% reduction in UI overhead on the main menu in a steam thread: 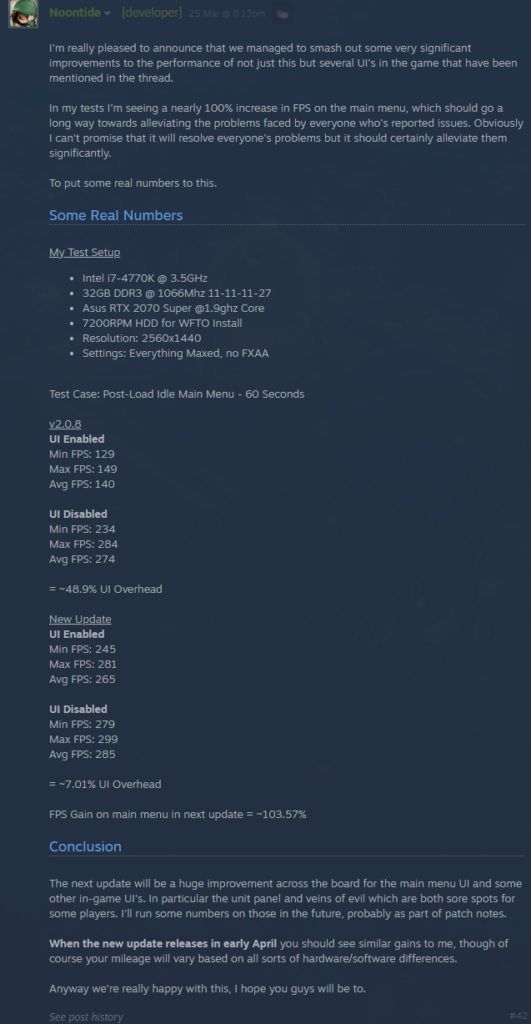 Gains for the In-Game UI are more circumstantial but the unit panel in particular is much, much faster taking only 0.1ms to render down from 5ms when fully populated and in advanced mode. That’s a massive 5000% gain in performance!

Click here to chat about this update on our Discord
Never miss an update! Sign up to our newsletter!
Last edited: Apr 12, 2022
Likes: SeriousToni

What?? I really wasn't expecting this! I read about a possible patch coming up but thought this was a really bad April fools joke.

This is so cool! Can't wait for the patch to arrive on GOG and finally replay the game again!

I can't imagine how much work it was to put in the dynamic shadows without killing the performance. I'll test some of the options, but have you considered enabling dynamic shadows only in 1st person mode? I guess for many people this option could save a lot of performance when they play the game normally zoomed out, but enhance the close up graphics automatically in 1st person mode. Is this possible?

Also a lot kudos to the many bug fixes, especially the dungeon heart deserialization and the patrol route fix. This was much needed too!